As an attorney I have represented and worked with national organizations such as the March For Life Education and Defense Fund, Thomas More Society, Stella Mar Films, Flourish Your Faith Ministries and United Stroke Alliance.  In addition, I have over 15 years of business experience working in areas such as nonprofit administration, real estate (brokerage and development) and media production. 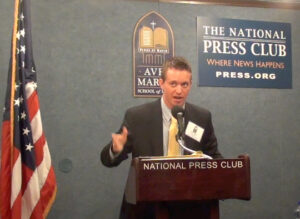 As a public speaker I have developed a unique style of connecting with audiences of all sizes at events around the country.   I have presented talks and workshops on everything from pro-life matters to business and entrepreneurship. I have been interviewed on EWTN’s Life on the Rock regarding my past media ventures.   More recently my wife and I were interviewed on EWTN’s Pro Life Weekly and on Al Kresta’s national Radio Show regarding our 6th child, Fulton Joseph.  I produced a song called Fulton’s Song using Fulton’s heartbeat as the metronome.  Fulton’s Song was played for Fulton every night during the pregnancy.  The song was also subsequently released on YouTube and has received thousands of views.

During the pandemic I developed a number of webcasts and online events to keep clients and causes engaged with their supporters.  Finally, as a producer of both film and music projects I have a unique skillset combining creative, business and legal experience.

Ultimately, I am a husband and father of six children.  I am a devout Roman Catholic, in the words of Tom Monahan “trying to be a good Catholic.”   I am licensed to practice law in the States of Illinois and Florida.